Cinnamon Sugar Soft Pretzel recipe is a made with a pretzel dough slightly sweetened with brown sugar and warm cinnamon and finished with a cinnamon drizzle. They’re the perfect finger food!

This Cinnamon Sugar Soft Pretzel recipe is the perfect finger food for your next gathering. Since I originally made them I’ve decided that they’re even better if you don’t do the baking soda dip before you bake them as a real pretzel requires.

As nicely as they originally turned out I have to be straight up with you. You can trust this recipe to be delicious!

One of my very first experiences in the kitchen was making cinnamon toast. It was plain old toasted white bread buttered from edge to edge and then sprinkled generously with a mixture of cinnamon and sugar.

The whole thing melted together and in my opinion was the definition of ambrosia. I could make one heck of a piece of cinnamon toast!

Our host is Stacy who is the mastermind behind Food Lust People Love Blog.

I’ve made pretzels a couple of times and love their salty briny exterior and soft interior but love this pretzel recipe without that briny dip.

Pretzel sticks are so much easier to handle versus pretzels. Bites would be even easier. Skipping the briny dip make them super easy! 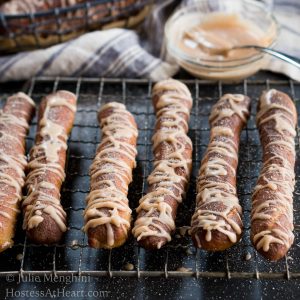 Now let me share what these other amazing bakers have done with this challenge.

#BreadBakers is a group of bread loving bakers who get together once a month to bake bread with a common ingredient or theme. Follow our Pinterest board right here. Links are also updated each month on this home page.

If you liked this recipe, here are a couple more that we love!

Took these to a party and they disappeared

Those pretzels look soooo inviting and tempting. I don’t think I can stop snacking on these :-)

Wow so beautifully done, love how u have shaped them as sticks ! We are a big fan of cinnamon flavored desserts and I bet these would vanish in minutes in my place

Thank you so much, Priya!

Tempting recipe. I used to live in the Pennsylvania Dutch area, and I'll tell you, one of the only good things about it, food-wise, were the pretzels. I miss them. I've never tried making them myself, but after seeing this recipe, I'd like to give it a try.

Thank you, Jeff! I've heard that Pennsylvania is beautiful but haven't had the opportunity to visit yet. This was my third time making pretzels and each time it gets easier and less messy.