Caramelized Pear Pie Filling Recipe is full of tender pears drenched in brown sugar and cinnamon. It makes a great topping or a great dessert on its own.

THIS POST HAS BEEN UPGRADED FROM 10/27/14 TO IMPROVE READER EXPERIENCE.

Caramelized Pear Pie Filling is swimming in a warm sweet gooey brown sugar and cinnamon sauce that compliments so many recipes or absolutely delicious on its own.

Pears are one of those beautiful fruits that I crave. I love eating a fresh pear, pear desserts, or salads with pears such as Chicken Pear Salad with Goat Cheese.

I grew up with a huge pear tree right outside my bedroom window. It produced huge pears and I remember the juice just running down my chin after biting into one of those juicy pears. My grandmother canned quarts upon quarts every year. There isn’t much better than canned pears in a sweet syrup when there’s 10 inches of snow on the ground.

I have a horrible habit of overbuying produce. Do you have that problem? I can’t be the only one. Well after one of these trips, I had 8 pears sitting on my counter that were all ripening at the same rate.

I love pears but don’t quite know why I thought two people should have a dozen pears and reasonably expect to eat all of them. What I did know is that we wouldn’t be enjoying them for long if I didn’t do something with them soon.

Cooking fruit with cinnamon and brown sugar just warms me from the inside out. I grew up eating fruit prepared like this. One of my favorite ways to eat pear filling is warmed and spooned on vanilla ice cream!

This Pear Pie Filling recipe is made with sweet brown sugar and cinnamon combined with beautiful ripe pears. This filling can be put in the freezer in an airtight container to be enjoyed when fresh pears are only a memory.

What kind of pears are best for cooking?

Good Keeping states: Bosc and Anjou varieties are tops at holding their shape and texture. In a pinch, Bartletts and other varieties work fine, too. Avoid Comice pears for cooking.

I love the flavor and texture of Bartletts so that’s what I get. I just make sure that I don’t overcook them.

Do pears have to be ripe to bake?

The best way to judge ripeness is to gently press the neck of the fruit near the stem with your thumb; if the flesh gives, the pear is ready to use.

Pear Pie Filling can be stored the same as you would fresh pears such as:

If you like this recipe, here are a few more I think you’re going to LOVE! 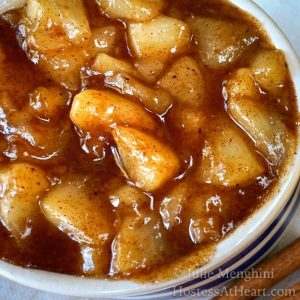 Store in the refrigerator for up to 3 days. Filling may be stored in the freezer in an airtight container for up to 3 months.

This recipe was updated from it’s original on October 18, 2018. The recipe was slightly amended by adding water to the cooking pears.

How would you serve this Caramelized Pear Pie Filling? Leave me a comment with your suggestions! With a spoon is my #1 suggestion!

Just wondering about using this as a pie filling - should I cook the recipe as you have posted and then add it into the pie shell? If I put the pear mixture in raw I don’t put in a 1/4 cup of water, right?

Julie Menghini can you send me the pie filling recipe

Hi Merry, great question! If you're baking a pie with this recipe, don't pre-cook it, and don't add the water. I also have a pear pie recipe that you could use. https://hostessatheart.com/pear-pie/

Thank you for the recipe. Used it to make a cobbler. I added 1/2 cup of chopped pecans and it was delicious. Questions: If frozen, how long will it keep? If canned, do you cold pack? And for how long?

Hi, Kat! Cobbler would be amazing with this recipe, especially with the pecans! I haven't canned this but our reader Sue states "if you exchange the cornstarch for clear gel. you can also follow an apple pie canning recipe and replace with pears". I do freeze them in airtight reclosable freezer bags for up to 3 months. I've gone longer than that with no problem but that's a good guideline.

We were gifted some beautiful pears not long ago, made this to go with our pork chops last night, like an applesauce, only so much better! Thanks for a great recipe!

That is a magically delicious pairing, Kathleen!

I froze 50 lbs of bosc, asian and bartlett pears and have around 300 lbs of kieffer pears My neighbor gifted us. Will they work in this recipe and would you exchange exact amount of clear jel for the corn starch or follow the amount in a normal pear pie filling?

Oh you're so lucky to have all of those pears! I generally don't use corn starch or clear jel in my fruit pies.

Would like to can pie filling, is this possible

This recipe is perfect for canning.