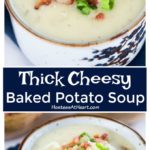 I think you’re going to love it. It’s a quick and easy potato soup recipe that gets my stamp of approval. I think I ate three days in a row loved it.

The following are affiliate links. We are a participant in the Amazon Services LLC Associates Program, an affiliate advertising program designed to provide a means for us to earn fees by linking to Amazon.com and affiliated sites. For more information, please see our disclosure. 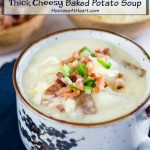 This soup looks so delicious and flavorful!

Looks hearty, creamy and delicious! Love everything about this soup.

Now this is my kind of comfort food! With just the two of us most days, freezing half works well for us.

Thank you, Sandra. I don't know where I'd be without my freezer!

OH my gosh!! ME TOO!! Scalloped potatoes and potato soup were something I hated as a kid!! However - loaded baked potatoes? yes!! That soup looks super yummy!!

I thought I was the ONLY one! Thanks, Michaela!

The thicker the Better when it comes to potato soup. I tried this with Yukon golds like you gave in your pro tip section and Im blown away at how creamy the soup is. I have a favorite recipe that Ive made in the past, but this one was ready so much faster and easier! Definitely going to make this again! thanks

Thank you, Michele! So glad you enjoyed it. Thanks for letting me know!