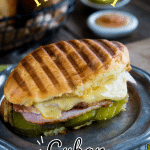 If you’ve ever taken that first bite of an authentic Cuban Sandwich, you know you are in for a real treat with this Cuban Sandwich Recipe. First, comes the sweet buttery bread a sandwich loaded with Cuban pork shoulder roast, cheese, smoked ham, and pickles.

We truly believe that this is the best Cuban sandwich. It is a complete meal between two slices of bread. It’s sweet, tangy, eggy, and everything that I could want in a Miami Cuban Sandwich Recipe.

This post was updated from 2019 to improve readers’ experience. No changes were made to the recipe.

Our son lives in Miami and we had our first experience with Miami Cuban food shortly after he moved there.

We fell in love with their authentic Cubano sandwich, and I set out on a quest to make a Miami Cuban sandwich recipe from my own kitchen. (If you are looking on a local menu, Cuban restaurants generally call this sandwich a Cubano Sandwich.)

Since first making my Cuban Sandwich recipe I’ve learned that there is also a Cuban sandwich called a Cuban Medianoche sandwich. The recipe that we used is featured in the cookbook “Three Guys From Miami Cook Cuban by “The Three Guys” from Miami.

They use the Medianoche bread and call it a Cuban Sandwich but technically it could be a Medianoche. I’m just the cook so if you’re passionate about the difference, take it up with the pros!

In the meantime, you’ll need to make the bread in order to build the best Cuban Sandwich ever.

What is the difference between a Cuban sandwich and a Medianoche?

A Medianoche consists of roast pork, ham, mustard, Swiss cheese, and sweet pickles. It is a close cousin to the Cuban sandwich. The chief difference is that a medianoche is made on soft, sweet egg dough bread similar to Challah rather than on crustier Cuban bread.

We took liberty here and made our Cuban sandwich on Medianoche bread. I highly recommend it!

How to Make a Cuban Sandwich

NOTE: You only need 1 pound of the pork for 4 sandwiches, but we baked the entire pork roast and then freeze our leftover pork for a future dinner, making a delicious no-fuss meal when we are too busy to cook or just don’t feel like it.

Step 1: Mash the garlic, salt, and peppercorns into a paste, using a mortar and pestle or a food processor.

Step 3: Heat oil in a saucepan until hot. Remove the oil from the heat and quickly AND CAREFULLY whisk the garlic-orange juice mixture until well blended. Let cool before using it as a marinade.

Step 5: Preheat the oven to 375°F. Remove the lid from the pork and roast for 20 minutes. Reduce the temperature to 225F and roast until the pork can easily be pulled apart with a fork. Approximately 2 hours and 20 minutes. I roasted my pork until it reached an internal temperature of 175°F. Let rest for 10 minutes. Pull the pork or slice it.

How to assemble this Miami Cuban Sandwich

There is only one way to build this sandwich!

“The Three Guys” from Miami state there is only one way to build this sandwich. On buttered Medianoche bread, place the pickles, roasted pork, ham, and then cheese in that order. Mustard is optional. We combined Dijon mustard with a little sriracha sauce. The difference is amazing.

4 sandwiches only take 1 pound of meat. I freeze what I don’t use so we always have Cubanos without having to roast the pork each time. You can freeze the meat in sandwich portions in plastic freezer bags or vacuum sealing bags.

Cooking time depends on the size of your roast.

The Three Guys from Miami recommend that you let your meat and cheese come to room temperature so the bread so doesn’t get over toasted before the cheese melts.

We recommend that you toast the inside of the bread so the pickles don’t make your bread soggy.

I add a little Sriracha to Dijon mustard. It adds a delicious little kick to the sandwich and I recommend that you spread the mustard evenly over the entire inside of each piece of bread so every bite is perfect.

Pin this yummy sandwich to your favorite sandwich board!

If you like my Cubano recipe, here are a few more I think you’ll love! 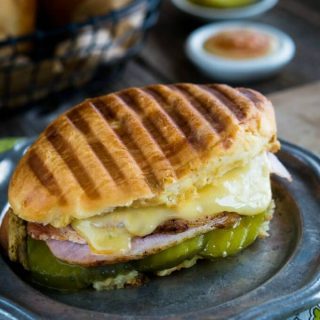 4 sandwiches only take 1 pound of meat.  I freeze what I don’t use so we always have Cubanos without having to roast the pork each time. Cooking time depends on the size of your roast. The Three Guys from Miami recommend that you let your meat and cheese come to room temperature so the bread so it doesn’t get over toasted before the cheese melts. I recommend that you toast the inside of the bread so the pickles don’t make your bread soggy. * I add a little Sriracha to Dijon mustard.  It adds a delicious little kick to the sandwich. Recipes courtesy of the Three Guys From Miami from their book: “Three Guys From Miami Cook Cuban.” Copyright ©2004 All Rights Reserved. Check out their website at: https://icuban.com/food https://icuban.com/food

My mother-in-law gave me a panini press/grill. We’d been wanting one and she never used hers so we were the beneficiary!

Now that we had a panini press, we could make them without a foil-covered brick or a cast iron skillet…or so we thought.

We squished the bread until the whole thing slid apart as you can see. The ham slid to the back and the cheese and pork to the front.

You asked me to post some less than perfect results. My perfectionist self is doing it under duress.

Even though the first attempt tasted amazing, our Panini skills needed some work as you can see! Like anything, practice makes perfect.

I love this sandwich. I like to serve a bowl of Spanish bean soup with a cuban.

That soup sounds amazing too, Lori! Would you share your recipe? If so, email me at [email protected] Thank you!

That's a whole lot of effort to push the false notion that it is an actual Cuban sandwich. You do not find real cuban sandwiches in Miami because they didn't come from there or Cuba, they come from Tampa and also have salami on them to represent to Sicilian cigar factory workers contribution to the authentic Cuban sandwt.

Thanks, Peter for your comment. If you read the post, you'll see that it was created in Miami and there's been a whole lot of debate on this sammi. I love learning the originality of recipes and your input is appreiated.

Finally, someone with the correct information on making authentic Cuban sandwiches! As a native Floridian, I have been taught the real way to make this sandwich since I was little. You even got the order of layering the ingredients correct. The only thing I would add is that the bread should be "creased" with palm fronds instead of a knife (at least it was in the old days).

Thank you, Sherry! I didn't know about the palm fronds. What a fun fact. Finding a palm in Nebraska just wouldn't be easy however, lol!

I'm from Tampa, the land of Cuban sandwiches and this looks perfect!

Thank you, Ellen! I appreciate that!