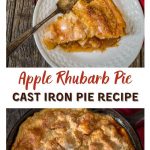 Apple Rhubarb Pie Recipe is the perfect blend of sweet and tart. This Cast Iron Skillet pie nestles fresh fruit and flaky crust over a layer of buttery caramel.

By baking this Apple Rhubarb Pie in a cast-iron skillet, people can only anticipate how amazing all of the layers bake together.

This old-fashioned rhubarb pie has been given a makeover by adding fresh delicious apples, and a layer of caramel under a flaky crust.

Warmed and under a spoon of creamy ice cream are what dreams are made of.

When I was a child, my sister and I played outside all day long. We lived in a small community so could go just about anywhere our legs could take us.

We often stopped and picked fruit from trees to snack on or we would dare each other to eat raw rhubarb.

My mouth puckers up just thinking about it, but who could turn down a dare? I would have picked it by the barrels if someone would have made me a Rhubarb Apple Pie!

I just love cooked rhubarb. Specifically, in a rhubarb pie. I found some gorgeous rhubarb at the farmers market and couldn’t resist.

How to choose Rhubarb

Rhubarb is in season in the Midwest beginning in April for about 8 to 10 weeks. However, some plants continue producing throughout the summer.

You can tell the rhubarb is ripe when the stalks are 12 to 18 inches long and the stalks are firm, crisp, and have shiny skins according to One Green Planet.

Avoid choosing rhubarb that is soft, limp, or contain blemishes.

Rhubarb, once picked, can dry out quickly. It’s best to store fresh rhubarb stalks in a sealed plastic bag in the refrigerator. Don’t cut them until you’re ready to use it.

If you can’t use the fresh rhubarb immediately, you can cut it and freeze it in an air-tight container.

Rhubarb is another ingredient that John was convinced he didn’t like. He must have taken the dare too.

This pie busted that myth. I knew he would never go for a rhubarb pie. We love strawberry rhubarb pie and knew that apples and rhubarb could be a winning combination too.

We decided to use the same method as my skillet apple pie. That pie was simple to put together and makes clean up so easy.

I’d rather eat pie than cake. Here are a few of our favorite recipes

Why bake the pie in a cast-iron skillet?

We love the way pies bake up in cast iron. The heat just bubbles that caramel layer and cooks the crust right into it.

You can use a 9” or 10” cast-iron skillet. Any baked pie can actually be baked in cast iron.

If you have a newer cast-iron skillet, make sure that it’s seasoned properly before you use it.

The bottom crust that is placed over melted butter and brown sugar before it’s baked adds an amazing caramel layer to this Rhubarb Apple Pie.

It gives this pie a buttery sweet foundation. The sweetness of the apples and brown sugar in contrast with the tang of the rhubarb is a wonderful combination.

How to make an Apple Rhubarb Pie

This pie was juicy, and when we sliced it, thick juices ran. That wasn’t a problem for us, especially when spooned over that scoop of ice cream…ok, make that two scoops of ice cream!

A few of the most popular recipes on Hostess At Heart 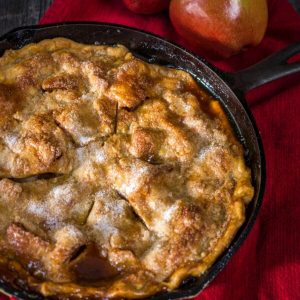 I’m definitely a pie lover, are you? This Apple Rhubarb pie recipe is one of my favorites. Do you have a favorite Pie? Please share in the comments below.

I make a lot rhubarb desserts using my own rhubarb. Thought I would give this one a try. I liked the rhubarb/apple combo. I used a bit less sugar in my filling as I like the tart taste of rhubarb. It sounded as if the filling was a bit loose, so I didn’t use any flour and added 4 tablespoonfuls of tapioca instead. Filling was perfect and held together well. The caramel really didn’t belong however. It drowned out the taste of the rhubarb. It made it pretty difficult to get out of the pan after it cooled as well. I will try this again, without the caramel. Made it in my enamel cast iron pie plate.

Hi, Becky! Thank you for your comment and tips! You're so fortunate to have your own rhubarb. I planted some this fall in hopes I can finally get it to grow at my home. 3rd attempt! This pie isn't an easy one to cut into slices as you do pie baked on a pie plate. I usually just scoop it out with a big spoon. We like the brown sugar flavor in this pie but I'll have to give it a try without the caramel as you suggested.

Two of my favorites! Rhubarb and apples together! This looks too good to be true?

This spells Midwest summers. We love this pie.

I don't know if I've ever had rhubarb and apple together, but it sounds like a nice combination. Your crust looks fantastic!

Thanks Jeff! I love this combo. The apple mellows the rhubarb.

I saw rhubarb in the store a few months ago and I wanted to make a pie! I will save this recipe I love the apples and rhubarb!

You are so sweet. I am so happy that you stopped by. I just love pie and recently attended pie school! It was so much fun.