Rustic Cast Iron Skillet Apple Pie recipe is loaded with thick cinnamon apples on top of a crust sitting in a layer of hot buttery caramel. This pie just begs for a scoop of ice cream and a crowd to help you eat it.

THIS POST HAS BEEN UPGRADED FROM 8/22/14 TO IMPROVE READER EXPERIENCE.

Skillet Apple Pie hides a layer of thick buttery caramel below the bottom crust that bakes into the pie. Cast Iron Apple Pie is a simple rustic but easy pie to bake that will soon be everyone’s favorite apple pie.

Have you seen my “Apple Baked Beans” post where I told you about our Back-to-School potluck that we participate in every year with our neighborhood kiddos?

In addition to the apple baked beans, I bring the dessert. They’ve requested the same dessert for the last several years in a row, Cast Iron Skillet Apple Pie.

Even though the weather is still warm, baked apple desserts are my favorite and I can eat them any time of year.

Years ago I found this recipe for Skillet Apple Pie in Southern Living SEPTEMBER 2011 and it’s still our most requested dessert. One bite will tell you why!

I served this pie like a cobbler by scooping servings out with a large spoon instead of slicing it. It goes a lot further that way and you can make sure each serving gets a healthy dose of that caramel bottom.

Either way, it’s scrumptious! If you can serve it hot, all the better. My guests are always intrigued when I show up with an Apple pie in a skillet.

How to transport this pie?

When I have to transport this pie, I’ll cover the top with foil and place it in the bottom of a cooler with a towel covering the bottom like a nest and then wrap another towel around the pie.

The skillet really holds the heat and the cooler helps keep it warm until it’s time to serve it.

What are the best baking apples?

You want a firmer apple for baking. Softer apples will break down too much and will not let you slice or spoon a decent looking serving.

Plus the texture isn’t as desirable as being able to bite into a loaded slice of skillet apple pie! Good baking apples according to Bon Appetit include:

Doesn’t this Skillet Apple Pie just scream ooey gooey comfort food? You would never believe how easy it is to make.

How to Make a Cast Iron Apple Pie

You need to be gentle but work quickly. Once the crust starts getting warm, you aren’t going to be able to move it around. I used a refrigerator crust. You can make your own. Please don’t judge.

A few items that you will use to make this Skillet Apple Pie: 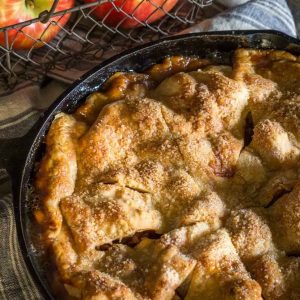 Recipe originally from Southern Living SEPTEMBER 2011 edition You can cut slices or scoop this pie to serve it.  It will serve 10 if scooped.

I had the same issue that someone else mentioned. The butter pooled on top of the brown sugar (when making the caramel), and so I drained the butter off. The caramel looked great after I did that, but ended up sticking to the bottom of the skillet after being baked. It was difficult to cut pretty slices. Just wondered if you could put a pre-made caramel sauce on the bottom of the skillet as opposed to making this mixture and waiting for the sugar to dissolve...? Or do as another person commented and place some parchment on the bottom of the skillet, then place caramel over that. I really liked the way the pie tasted, and it is definitely easy to prepare...would just like to figure out the caramel issue!

Hi Cat. Actually, the butter will rise to the top of the caramel but I don't drain it off. It will blend back together as it bakes. It's very difficult to get pretty slices with this pie. I prefer to just use a big spoon and top it with ice cream. No one ever complains that it's not the perfect slice. I've never tried jarred caramel sauce. I bet it would work pretty well.

I didn't have a 10" cast iron skillet, so I used a stainless steel one instead, with a deeper lip. The advantage was that I didn't have to put a drip tray underneath but the disadvantage was I should have a) cooked it longer because stainless steel doesn't hold heat as well as cast iron and b) let it sit for at least 1.5 hours after baking, so that the juices could congeal. Or perhaps I should have just added corn starch and flour to make up for that. But it's true what everyone says - the bottom crust miraculously stays intact and that caramel is lovely!!! I also accidentally used white instead of brown sugar for most of the caramel because I wasn't thinking and it still worked out. I also used all honey crisp apples and cut them slightly larger than 1/2 inch because I wanted them to have heft.

I'm so glad that it worked for you, JC! Thank you for your tips. They are all appreciated. Not everyone has cast iron so your tips are greatly appreciated!

Could I make this in a normal pie pan?

You absolutely can Sara but make sure it's deep.

I've made this Southern Living skillet pie several times, and it's always a hit! My only change is I add 1 Tbsp. of flour to the apple mixture so it's not quite so runny. It works beautifully!

It's the best right, Andrea? Thank you for your tip.

I love this pie! The only problem I have with it is the bottom crust is really hard to get out. My cast iron skillet is well seasoned but it always sticks. Could I melt the brown sugar mixture in something else, put parchment paper in the skillet, pour the mixture on top, then the bottom crust then the rest?

I usually have a real buttery mix in the bottom so it doesn't stick. It doesn't cut like a regular pie, however. I've never done this but will try it myself. Melt the butter only and add the crust. Mix the brown sugar in with the apples. I don't know that you'll want to add the total amount of brown sugar because it would make the filling really sweet. Try 1/2 cup. If you do this, let me know how it comes out. I'll also put it on my list to do and will update the post. Thanks, Nancy for your comment!