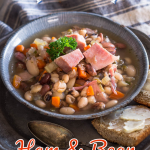 This Ham and Bean Soup Recipe is perfect for lunch or dinner. It’s a hearty protein-packed 13 bean soup recipe that will keep you satisfied long after a meal. The best ham and bean soup you’ve ever had will feed a crowd too, and leftovers can be frozen for future use.

This post was updated from 2017 to improve readers’ experience. No changes were made to the recipe

If you love soup on a cold blustery day but don’t like all of the fuss some homemade soups require, you’re going to love this easy Ham and Bean Soup Recipe. It’s the ultimate comfort food.

Ham is often on my holiday table. Ham and about 100 other dishes. You see, I cook for an army whether there are 6 of us or 60.

Before Thanksgiving, my local grocery store runs a promotion where you get a free turkey if you buy a ham. This year I decided to cook the turkey and save the ham for another day.

One thing about ham is it goes a long way.

After we cooked it we only sliced what we needed for our meal. We put the bone and the rest of the uncut ham in the refrigerator for soup.

There is nothing like this ham and bean soup recipe. You wouldn’t believe the flavor all of those beans, peas, and lentils add. You can put it together in no time too.

How to Make Ham and Bean Soup

Making this – the absolute best ham and 13 bean soup recipe ever, is shockingly easy. The recipe uses leftover ham, the bone in the ham also called a ham hock, a soup mix, and a few other ingredients to make a delicious soup with hardly any effort.

Ingredients for Ham and Bean Soup

To make the best bean soup with ham, you’ll need to start by rinsing the beans and doing a “quick soak” or “simmer and salt” method to get the beans ready. You can also just soak them for eight hours as the recipe suggests. Then you place the beans and the ham bone in a large pot such as a dutch oven or large soup pot, cover it with water and bring it all to a boil over medium heat.

Next, simmer over low heat for three to three and a half hours until the beans are soft. Finally, add the cubed ham and other ingredients and cook it for at least thirty minutes. Before serving, remove the ham hock, and throw any meat that comes off of it back into the soup.

FAQ for the Ham and Bean Soup Recipe

You can use any combination of dried beans that you want. We recommend Dried Pinto Beans, Navy Beans, or Great Northern Beans.

Why use dried beans?

Dried beans are generally less expensive and don’t have added sodium. You can use canned beans but they will not be as flavorful or cook up quite as thick and creamy.

Do you have to soak the bean mix?

No, that’s a myth. You don’t have to soak them all night however, you can do a “quick soak” or a “salt and simmer” method.

How to do a Quick Soak for Dry Beans

To do a “Quick Soak”, cover the beans in a heavy-duty pot. Bring them to a boil and then remove them from the heat. Let rest for 1 hour.

How to Use the Salt and Simmer Method for Dry Beans

For the Salt and Simmer method, cover the beans with water in a heavy pot. Add 1-½ teaspoons of salt and the ham bone. Bring it to a boil, then turn the heat down to simmer and cook for 1 hour. Remove the bone and add the diced ham, onion, carrots, and celery. Add additional salt and pepper to taste. Cook for an additional 30 minutes or until the carrots are tender.

Do you have to throw out the soaking liquid?

No, this article actually stated that beans cooked in the soaking liquid were more flavorful.

What if I don’t have a leftover Ham Bone?

I’ve actually purchased just the ham bone from the butcher before. However, you can add sliced bacon or skip the bone altogether.

The best thing about this recipe is that it’s so versatile. You can make it the way your whole family likes it.

How to Store Ham and Bean Soup

How do you store ham and bean soup? This soup can be stored in the refrigerator for 3 or 4 days. I like to separate it into individual servings and put them in microwavable containers so they can make a quick dinner the next day or be grabbed easily for quick lunches.

This soup freezes well in an airtight freezer container for up to 6 months. Make sure not to over-fill it and to give it a little space in the container so it doesn’t dislodge the lid. You’ll love having this easy recipe in the freezer on busy days.

What to Serve with hearty Ham and Bean Soup

This 13 bean soup recipe is crying out for some delicious hot bread on the side!

I like to serve this easy homemade muffin with this soup such or my Pumpkin Spice muffin. They’re perfect together.

You could also try it with this delicious Crusty Italian Bread.

If you enjoyed the Best Bean soup with Ham, here are a few more you may enjoy! 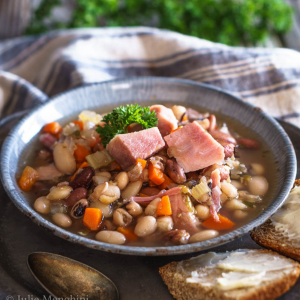 Prep time includes 8 hours of soak time. You can use canned beans in lieu of dried beans. Add them when onion, celery, and carrots are added. Also, soup can be made in the crockpot (slow cooker). Add all of the ingredients except the cubed ham. Allow to cook on high 4 hours or low for 8 hours. Add the cubed ham and serve when hot.

The bobs red mill bean mix is 29 oz. do you use the whole bag? On the bobs red mill web site they use 2 cups, and on the package instructions they use 1 cup. I don’t want to mess this up looks too good.

@Julie Menghini, Thank you, I will use the whole bag too. Can’t wait, thanks for the quick reply. Making this tonight.

Hi, Gina! I make a huge pot and use the whole bag. Bob's Red Mill says 8 servings is 2 cups of the mix. I make the whole thing and freeze what's leftover for another day. You could definitely scale down the amount that you want to make. This is probably my favorite soup. I love having it in the freezer for when I'm craving it. Thank you for your question and I hope you'll let me know how it comes out.

I was so happy to have found this recipe! It's my hubby's favorite and he was so excited when I made it for him!! Thank you!

Thanks, Michaela! I love it too.

Yum! This looks so comforting and delicious. Can't wait to try!

@Julie Menghini, mine didn’t take that long to cook - maybe two hours - it broke down more than yours - delicious! I bought the beans and looked to see what to add.

I love that this dish is so diverse! It’s so tasty with the different beans and flavors!

Thank you. It's so easy to make your way.

Love this recipe! Easy too as long as you plan ahead and give the soup some time to cook. We'll be making this again!

Thank you, Min! It's a favorite in my house.