The Best Chili recipe is a simple homemade beef chili that’s loaded with flavor. This recipe can feed a crowd.

Why isn’t chili called soup or stew? Chili is chili and that’s just the way it goes. There are probably as many homemade chili recipes as there are the people who make it. Once you make the Best Chili Recipe, it will become your favorite chili!

Growing up chili was always tomato-based and made with ground beef.

These days there is tomato-based, white chili, beef, chicken, or vegetarian.

You can have as many varieties as there is imagination. One thing that sets people against one variety versus another is whether it’s beans or no beans.

The chili my mother made included tomato juice, ground beef, kidney beans, onion, and the spice packet from the grocery store. I loved it. That is until I tried this chili at a party we attended years ago.

The recipe is still written on a scrap of paper and doesn’t have a name but it’s The Best Chili recipe I’ve ever had.

This chili for a large group recipe can be made ahead and made just as spicy as you want. You can also just put it in a large crockpot and let everyone serve themselves!

I made this great chili recipe and entered it into our neighborhood chili contest.

I needed a delicious chili recipe that would feed a crowd, and while we love it, I wasn’t sure what everyone else would think.

It was the winner hands down and my “Best Chili Recipe” is now the recipe that my neighbors make for their families.

What is the difference between Chile and Chili Powder?

Chili Powder is actually a blend of dried chile pepper and other spices such as oregano, cumin, paprika, garlic powder, peppercorn, coriander, and cayenne according to Southern Living.

It’s different according to the brand you buy. There’s also a big difference between Mexican Chili Powder and Indian Chili Powder. I learned that the hard way!

Chile Powder is pure dried chile peppers even though the type of chile peppers can be different. They’re often sold under the name of the chile such as Ancho, Guajillo, Chipotle, Jalapeno, among others.

The PepperScale states that dark chili powder often contains more of the chili pepper (like ancho) with a darker color and the spices are often roasted for longer periods.

This leads to a seasoning blend that’s often earthier, smokier, sweeter, and spicier than the lighter powder.

Oh and there is a secret ingredient…..1 tablespoon of yellow mustard.

Believe it or not, it’s a game-changer. A friend of mine said she doesn’t like yellow mustard but after making this has a bottle in her fridge just for this recipe.

We’ve both tried it without and it makes a difference!

A few items you may need to make this Homemade Chili recipe:

12-qt Stockpot – This is such a nice stockpot for the price. I can use it for large recipes and the clean up is so easy! This recipe can also be cooked in a large slow-cooker.

While I believe that this is the Best Chili EVER, I have to admit that John’s Downhome Chili No-Beans recipe and the Spicy Chili Con Carne recipes are amazing.

If you’re looking for something a little less traditional, Sweet Potato Black Bean Chili or the Green Chili Pork recipes might be right up your alley.

Chili freezes great! I fill zip-lock bags and lay them flat to freeze. Using a cookie sheet works well. Once they’re frozen you can remove the pan and keep them flat or store them vertically. It’s a great way to save freezer space.

What to make with leftover chili?

Chili is a complete meal but when I cook something savory I like to complement it with something sweet. A great muffin, homemade apple sauce or cheddar cornbread are my go-to’s. 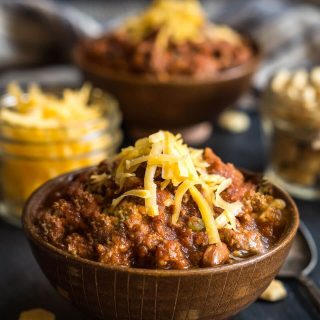 There aren’t any contests now. I make this chili and we all eat it. It makes such a large batch that I put some in my freezer. It’s like money in the bank. When I don’t want to cook I know I have some chili just waiting for me.

Don’t forget to Pin It!

ha! Your secret ingredient was a variation on the one we use! I've always used hot mustard powder--- but I remembered your recipe when I was out yesterday for our game day dinner. I must admit---- yours was so good. We didn't have even one bowl left today for leftovers! Going to keep this for the future!

Mustard powder? How interesting! I'm glad that our recipe worked for you!

1. Chili does not have beans. 2. Ketchup is never an acceptable ingredient for anything. It's a condiment and should never be used in cooking --especially in chili.

Tex is right if you were talking about Texas Chili which you are not. In Texas this would be classified as Meat sauce and served over spaghetti. We put no tomato products and no beans in our chili. Typically we don’t use ground beef small cubes of steak or roast and it is thickened with masa and is loaded with cumin. But... we are not talking about Texas chili we are talking about the Best Chili outside of Texas. Outside of Texas, chili is just a dish you cook for football games but in Texas it is our National Dish.

Wow, Tex I'm glad that I don't have these food rules. I could probably drive you crazy with some of my creations! Thanks for stopping by and I hope you'll find something you enjoy.

I absolutely love chili and this recipe sounds amazing!Definitely will give it a try!

Thank you Dolores! I just made another batch this week!

So excited to make this! I’ve been looking for a new chili recipe.

We love this one Shelby! I just made a big batch this week and put it in quart containers for the freezer. I love having it on cold nights for dinner.

I have heard of putting chocolate in the chili but never mustard! I am a huge fan of that vinegar-y tang of mustard so I can only imagine how good it tastes in chili!

@Julie Menghini, mustard has vinegar which tenderizes the meat. I slather my meats that I’m smoking in it, I use it in chili and sloppy joe!

Thank you, Jennifer! Believe it or not, it isn't tangy. I can't even say what it does but it does....