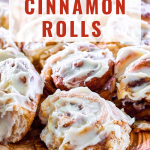 Soft and tender, this homemade cinnamon rolls recipe makes the perfect breakfast treat for your family. Make a batch on weekends or holidays for smiles all around.

If you’ve always wanted to make an amazing recipe for homemade cinnamon rolls but didn’t know where to start, we are going to lay it all out step-by-step in this post. You will become a pro in no time!

Why You’ll Love This Recipe for Cinnamon Rolls

How To Make Cinnamon Rolls

Please note, that the recipe card has more complete instructions. This is intended as an overview.

Step One: Mix the Dough.

First, you will heat the milk in a saucepan and add sugar and shortening. Then you will mix all of the ingredients together in a large mixing bowl following the step-by-step instructions included on the recipe card.

Cover and allow the dough to rise in a warm non-drafty area for 1 to 1-1/2 hours. Punch down and allow to rise again.

Step Three: Roll out the dough for your homemade cinnamon rolls recipe.

Step Five: Roll up the dough.

Create a roll by turning the dough toward you. You want the roll tight enough to hold together when you slice it but not so tight that it won’t allow the dough to rise.

Cut the roll into 1/2-inch slices with a sharp knife or dental floss.

Allow rolls to rise for another 30 minutes in the greased baking dishes.

Bake at 350 °F for 20 minutes. Remove pan from oven and allow to cool completely.

What is the best flour to use for cinnamon rolls?

Bread flour! Bread flour makes these rolls soft and fluffy. You can substitute with all-purpose flour but I don’t recommend it. The density of these rolls will come out heavier.

Why are my cinnamon rolls not fluffy?

Make sure you allow the dough to rise according to the recipe instructions. If you don’t, the rolls will not be fluffy. It’s also important that your yeast be fresh.

Do you roll cinnamon rolls tight or loose?

Roll the dough gently but not loosely, and then pinch the seam closed. You want it tight enough that when you slice the rolls, they don’t unroll but loose enough that they have room to rise. If the rolls are rolled too tight, the centers can pop up and over the roll while baking.

Baked cinnamon rolls can be kept in an airtight container or sealed plastic baggy at room temperature for up to one week.

Can I freeze Homemade Cinnamon Rolls?

Yes. You can freeze cinnamon rolls frosted or unfrosted, baked or unbaked.

Freeze unbaked cinnamon rolls after they’re sliced and before the final rise. Thaw unbaked rolls in the refrigerator overnight in the pan you choose to bake them in. Remove the rolls from the refrigerator and allow the rolls to rise until light and fluffy. 30 minutes to 1 hour.

To freeze baked cinnamon rolls, with or without frosting, you can freeze them in the pan or individually.

Thaw at room temperature when you are ready. To freeze individual cinnamon rolls, spread them out on a parchment-lined baking sheet until they are frozen.

Then place them in an airtight container, and they will stay separate so that you can remove one at a time as needed.

Individually frozen cinnamon rolls without frosting can be thawed in the microwave for thirty seconds at a time until they are ready to eat. Add the frosting if desired.

Cinnamon rolls with frosting should be thawed at room temperature since the microwave will just melt all of the frosting off. Cinnamon rolls can be frozen for up to three months.

Frosting can also be frozen and thawed with the cinnamon rolls.

Homemade cinnamon rolls can be reheated in the microwave. Start with ten seconds. Add another five to ten seconds, depending on how hot you want your roll. You may need to add more frosting since the microwave will melt whatever is on your roll.

What to Serve with your Recipe for Homemade Cinnamon Rolls

We grew up eating cinnamon rolls for breakfast or with a bowl of chili.

If you tried this delicious recipe, don’t forget to rate it and leave me a comment telling me what you think. I love hearing from you! 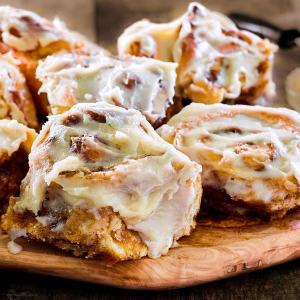 Adapted from The Vintage Mother Store in an airtight container for up to a week, or place in the freezer for up to 3 months. Rolls can be iced one at a time before serving or the entire plan all at once.

If you enjoyed this recipe, check these out!

These were so perfect, I made two pans for our big family breakfast and froze the rest for another time! Thanks!

Thanks, Kathleen. Having these in the freezer is like money in the bank for me.

This recipe is everything you want in a cinnamon roll -- soft and fluffy, sweet, cinnamony and sugary, with homemade icing that's soooo tasty.

Thanks, Eliza! I wish I had one in front of me too!

I'm such a sucker for cinnamon rolls! SO good!

Wow wow wow this recipe is the best

Thank you, Ruth! We love this one too.

This recipe made the perfect gift for my neighbors. They're already asking for regifts!

Thank you, Sally! I'd love a gift like this too.