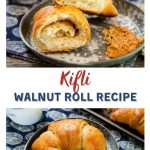 A Kifli Walnut Roll is a soft and tender dough filled with a sweet walnut filling and shaped into a crescent. Easy Walnut Rolls are special anytime.

Soft and tender yeast dough is filled with a sweet nut filling that is too good to be saved for special occasions. This sweet dough recipe makes a soft and tender Kifli Walnut Roll that is easy enough to make any time.

What is a Kifli?

A Kifli is a traditional yeast bread that is rolled and formed into a crescent before baking. The term Kifli is traditionally referred to as the Hungarian version and can be made as a pastry roll such as this one or a cookie.

In other countries, a Kifli can be called Kipfel, Kifla, Kifle, or Gipfel, and the list goes on according to who and where they’re made and date back as far as the 10th century.

Regardless of what you call them, they are easy enough to make in your own home.

These rolls may look complicated but the ingredient list is simple.

What is scalded milk?

I still do it because the warmer temperature helps activate the yeast and blends well with the softened butter. Also, it’s said to make breads light and cakes spongy.

You do not have to scald the milk for this recipe! However, I suggest that all of the ingredients be at least room temperature before they’re added.

How do you scald milk?

Making Kifli Dough is easier than many dough recipes. It is a soft and buttery dough that is easy to handle. It’s not as delicate as some sweet roll dough such as brioche.

I do recommend that you use an electric stand mixer with the paddle attachment. Here’s how we made the Kifli Dough.

Your dough experience is just about to change. Come meet your new BFF!

This post is sponsored by Raisenne® Dough Riser. The love of their product and my opinions are 100% my own.

There is a new innovative product that is just being released to the public called the Raisenne Dough Riser, and the bread gods were shining down by allowing us to get our hands on one.

“The Raisenne® Dough Riser takes the guesswork out of proofing by creating the ideal temperature to raise dough for a perfect proof in less time.”

As an avid bread baker, like many of you, struggled with the temperature of my dough during the colder months or when it was so hot outside that my air conditioning was blasting away.

When I first heard about the Raisenne Dough Riser, I wanted to vet it before recommending it, something I do before I ever recommend a product. The following are the questions that I had.

Is the Raisenne Dough Riser safe?

Yes, the Raisenne Dough Riser maintains a temperature of 85°F / 29.4°C so it will not burn you or the surface it’s used on. It is designed to shut off rather than overheat.

Where is the Raisenne Dough Riser made?

It is made in Wisconsin, U.S.A.

How do I store my Raisenne Dough Riser?

Between two baking sheets, in a drawer, or in the original packaging.

Will the Raisenne Dough Riser be available in stores?

No, the Raisenne Dough® Riser is available exclusively online through www.raisenne.com.

My experience was nothing short of amazing. Even though the Raisenne Dough Riser is intended for active yeast bread such as pizza dough, rolls, and recipes such as this one, I’ve used it to help my sourdough bread dough.

This product is round but I put a rectangular baking sheet on it and all of my rolls had a beautiful rise.

We’d previously looked at a dough proofer but didn’t want another appliance in the kitchen or the expense of it. The Raisenne Dough Riser doesn’t take up any space in my kitchen.

Back to the recipe already! I guess you can see I really love this product right?

The nut filling is very simple to make. I combined my ground nuts, sugar, softened butter, cinnamon and a bit of milk. You want to make it a sand consistency that holds it’s shape but isn’t overly wet. Think sand castles.

I used my mini food processor to finely grind my nuts.

Tips for the perfect Kifli Rolls

We LOVE baking bread! You can find all of our bread recipes here!

If you like this Kifli Pastry Roll, here are a few more recipes you’ll enjoy

Are you ready to grab your own Raisenne® Dough Riser? Head over to their website and grab yours before they’re sold out! 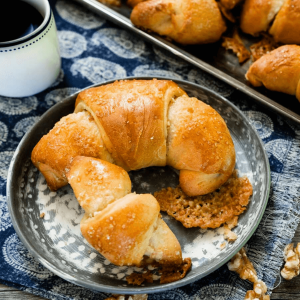 The turbinado sugar will stick to the rolls if the egg wash is still wet. It’s helpful to do a few at a time before the egg wash dries. It’s not necessary to scald the milk but we recommend that all of the ingredients be at room temperature.  Don’t spread the filling too heavily. It will bake out.

Our most popular recipes!

Hello- can these be made with bread flour? Thank you!

Hi! I'm excited to try this recipe! Three questions for you!

1) I do use raw milk. I've never had issues with it keeping dough from rising. Should I still scald it to 180 degrees? 2) How would you rate the sweetness level on the filling? 3) Can you freeze these?

Hi Julie! You can use raw milk and scalding it will make the dough a little fluffier but will turn out if you don't. The filling is sweet but I just used a smear in it so it is well balanced. These rolls freeze super well! I just put them in an air-tight container or a reclosable freezer bag. I hope you'll stop back and let me know what you think. Thank you for stopping by!

How many large crescents will this recipe make and when rolling out how thick should the dough be rolled. Once I know these facts I'll make them. Thank you.

Hello Guy! The dough is rolled thin like a cinnamon roll so not "windowpane" thin. I've made this recipe where I got 9 large rolls and 12 large rolls depending on how the dough rose and how thin I rolled it. As long as they're all rolled to the same thickness, they will bake the same and that's the most important thing. It's not a fussy recipe and there's a video in the recipe card that may help as well. I hope you'll stop back and let me know how it went! Thank you!

I am so happy I could cry.

I grew up with these. My German Grandmother would make so many at Christmastime that she would freeze them and hand them out through February!

But I couldn't find anything online, except the Kipferl pastries. I assumed that her family must have made them with bread dough instead of pastry dough because they were poor.

My grandmother was Hessen. In Hesse, they soften the "R" sound....the closest I could ever find was Kipferl, so I assumed it must be the "Kipfel" I grew up with, only the R was so soft you could barely hear it. I can double check with my aunt, but I think "Kipferl" is how they spelled this only it sounds like Kipfel.

But the last time I looked to try and find this recipe, I could find the plain Kifli and the pastry Kipferl, but not what I grew up with. I have such vivid memories of her making this. She would spend two days making it, she made so many!

I friend was asking me if we made lebkuchen, and I said no, we always made this instead when I was growing up (we bough the lebkuchen). When I tried looking up the links for her that I have found in years past, I found this article you posted here just a few months ago!!

I exclaimed aloud when I saw you page, so much so my husband came to see what was the matter!

But nothing is the matter, nothing was wrong. This is so right.

I thank you so deeply for sharing this, you will never understand quite what this means to me. THANK YOU.

Oh my gosh, Misty I can't be more grateful for your comment. I LOVE the memories that food invokes and the family stories that go with their recipes. I can't wait for you to give these a try and let me know if they're like your Grandmothers. We also have a nut roll recipe that's been in our family (Italian side) for almost 100 years. They may be close to what your grandmother made too? https://hostessatheart.com/nut-rolls-recipe/. Sometimes it's hard knowing what to call a recipe because the same recipe can be called 4 different things depending on the origin of the family making them. Thank you! Julie

How wonderful are these Kifli rolls..would love to try this recipe sometime..

Thank you so much Shailaja!