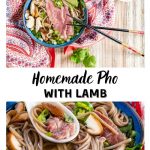 Homemade Pho is a flavorful soup with an Asian influence. The Pho Broth recipe is infused with spices and poured over fresh vegetables and thinly sliced lamb.

Homemade Pho with Lamb is a clean flavorful soup made with a flavorfully spiced pho broth, crisp vegetables, and thinly sliced rich lamb. Fresh Serrano peppers provide a delicious kick to every bite.

What in the heck is Pho? That’s exactly what I wondered the first time I’d seen it on a menu!

We were out in Colorado on a skiing trip. Several of the restaurants had a very eclectic vibe. My son was all excited when we came across “Pho” on one of the menus.

It was pretty funny trying to remember how it’s even pronounced let alone what it is.

Pho is pronounced “fuh” and is a Vietnamese soup typically made from beef broth and spices and then poured over noodles, vegetables, and thinly sliced beef or chicken.

I’m putting a disclaimer out there right now. I’m not claiming that this is an authentic Vietnamese Pho! This is our version of Pho, and boy is it delicious. You can read a little more about the traditional recipe and history if you’d like.

This post is sponsored by True Aussie Beef & Lamb but the opinions here, and love I have for their products and their story are all my own.

It wasn’t long ago that I had a beautiful French Cut Rack of Lamb that I used to make Pistachio Crusted Lamb Chops and Bacon-wrapped Lamb Medallions. I loved the fact that I got two delicious meals from that cut of meat.

For this Homemade Pho recipe, I used a boneless leg of lamb. Since the bone is removed, the meat is netted together making it so easy to create a lot of recipes from.

Traditional Pho is made from boiling beef bones for several days. It’s served in a large bowl and served with add-ins which can include herbs, bean sprouts, radishes, and noodles.

This Quick Pho recipe includes beef broth cooked with flavorful spices and then poured over fresh herbs, vegetables, noodles, and raw thinly sliced lamb. Here are our simple list and variations you can use to make it your own.

The garnishes you choose should be sliced thinly and do well in the hot Pho broth. Use whatever you like.

This locator can help you find True Aussie Lamb in your area.

How to make a spice satchel

Besides tasting absolutely amazing, this dish comes together quickly and the ingredients can be adjusted according to what you like. Our Pho broth recipe cooks in 30 minutes and tastes like it took days!

HERE ARE A FEW MORE EASY LAMB RECIPES YOU MAY ENJOY

We love lamb and you can find all of our lamb recipes here!

Products we use to make Homemade Pho with Lamb

Are you new to Homemade Pho or a seasoned Pho expert? I’d love to hear about your version of Pho Broth recipe! Leave it in the comments below. 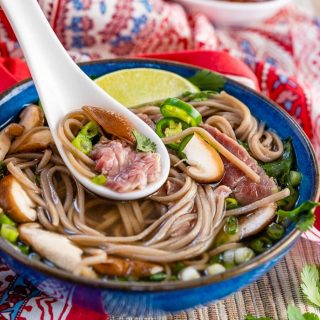 Putting the whole piece of lamb in the freezer for 10 minutes will make it easier to slice thinly. Nutritional values do not include noodles.

Tried this recipe?Let me know how it was!
Click here to cancel reply.

You know I love lamb... and this was so far out of how I would have ever thought to use it! But boy am I glad I saw this.... made it last night --- Jeff LOVED it so much--- he said next time make a double batch so we can have more leftovers... It was outstanding!

Oh, my word!! I was so missing going to my favorite Vietnamese restaurant - when this popped up in my timeline on facebook I was THRILLED!! Made it and it was DELICIOUS!! This will be my go-to Pho recipe!!

This was just the thing I needed to cure my takeout-blues! Our favorite pho place is closed and it's one of those things I just haven't made at home until now. This was easy and delicious!

Brooks is a huge fan of ramen and lamb of course but I don't know how to make either! This recipe not only satisfied his craving for both but won me major points in the wife department!

Thank you, Jennifer! It's so easy!

My daughter loves Pho as much as I do! We had the perfect lunch on the lanai! Amazing!

That sounds like the perfect lunch Nikki! Thank you!